Since the late 1990’s, the Naskapi Nation of Kawawachikamach (NNK), acting through Naskapi Imuun (a wholly-owned subsidiary), has undertaken several projects to improve the broadband services available in the Kawawachikamach-Matimekosh-Schefferville Region. Working with various programs from Industry Canada (IC, now ISED), Infrastructure Canada (INFC), and the Secrétariat aux affaires autochtones (SAA), Imuun installed and operated satellite earth stations, WiMax and mobile data services to deliver broadband services to the Region’s residents. While these satellite-based services were a vast improvement from the dial-up connectivity available through providers located outside of the Region, they were still limited in the applications that they could support due to cost and reliability.

In 2009, NNK decided to pursue a project to eliminate its reliance on expensive and unreliable satellite links for telecommunications. Imuun approached INFC, which was subsidizing a portion of the satellite operations, to reallocate those funds to construct a fibre optic link to the Region, and a Fibre To The Home (FTTH) network to connect all the buildings. With INFC willing to explore this possibility, Imuun commissioned a feasibility study in 2013 to determine how it could be done. Based on the results of the feasibility study, Imuun was able to lock down financial support from INFC, ISED, Indigenous Services Canada (ISC), Société du plan nord (SPN) and SAA to build the network.

The plan for the backhaul was to bury the fibre cable in the Tshiuetin Rail Transportation (TRT) railbed from Schefferville to Emeril Junction, and then along Hwy 500 to Labrador City. TRT is owned equally by Nation Innu Matimekosh-Lac John (NIMLJ), Innu-takuaikan Uashat mak Mani-utenam (ITUM), and NNK. Although as the recipient of the public funding NNK would own the infrastructure, the three owners of TRT agreed to jointly create a new company that would operate and maintain the network… and Sichuun was conceived.

The project team started launching RFPs in 2015. While generally guided by the feasibility study, many aspects of its recommendations were adjusted and/or taken in a different direction. One big improvement was the option of using strands of IOC’s fibre from Emeril Junction to Sept Iles, eliminating the need for a potentially very costly new fibre build to Labrador City.

Designs went through several iterations, vendors and contractors were selected, and in the fall of 2017 the actual laying of fibre began. 2018 was a big summer of construction, and by fall of 2019 the network was substantially complete. In April 2019, a limited partnership between the three First Nations was established for the operation of the network, and its general partner, Sichuun Inc., was born.

Today Sichuun offers arguably the best Internet in all of Canada, and is developing and delivering a full suite of related services to all residents, businesses, institutions and organizations in the region. The Sichuun Leadership Team and each of our employees are committed to three fundamental principles that guide our evolution in connecting communities: Local resources and businesses where possible – engage community, develop skills, create employment High quality products and services – critical for successful implementation, minimize costly troubleshooting and repairs Appropriate selection of services – full suite of options & uncompromised performance at affordable prices

One of Sichuun’s first orders of business was to come up with a logo, and naturally that meant a logo contest! Several excellent entries were received, but after careful deliberation, Sichuun’s Board of Directors selected the logo design from James Uniam, which you now see all over Sichuun’s website and signage:

James’ logo incorporates a dreamcatcher, a feather and a fibre optic cable, pulling together traditional native culture and the technology that will drive modern communication, economic development, and ultimately prosperity for the communities. Fittingly, James tells us the graphic means “where dreams flow”.

The full Sichuun logo uses James’ graphic almost untouched, but adds the company name and slogan: Connect. Communicate. Thrive. The font style is reminiscent of traditional Naskapi characters, and the colors of the fonts were picked from James’ logo as well.

Throughout the project, Imuun & Sichuun have had several exceptional partners, without whom the project would not have been the same. 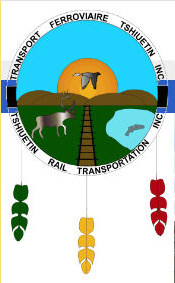 The only feasible route for bringing fibre to the region was along the railway, and TRT was very cooperative in accommodating our fibre installation. More than simply allowing the fibre to be installed, TRT accompanied our installation team during the build, provided essential rail transportation services helping our installation team distribute reels of fibre, relocated our work train as it progressed along the tracks, and even adjusted rail traffic schedules to help improve efficiency. TRT’s contributions to the project are greatly appreciated.

By offering access to existing but unused fibre strands from Emeril Junction to Sept Iles, IOC saved the project from having to build an additional 60 km of fibre over some pretty unfriendly territory. However, IOC went above and beyond by allowing the project to install backhaul equipment in QNS&L shelters along the tracks as well as IOC’s facilities in Sept Iles. Thank you to all the IOC & QNS&L people who have helped make this happen.

When it became obvious that burying along the road between Schefferville and Kawawachikamach was not going to be a feasible option, HQ’s pole line suddenly became an indispensable route option for connecting the two communities. HQ was highly accommodating of our request for access to use the pole line, which was deeply appreciated.

Perhaps our most important partner in achieving the success we have so far, Transelec / Common Inc. not only helped us navigate some relatively unknown territory, but they did it with unsurpassed professionalism, commitment to quality execution, and an uncommon allegiance as a partner that enabled a exceptional level of cooperation in a contractor relationship. Thank you, TCI, for not giving up on us.

Throughout the various stages of the project, Porlier has been a supplier to the project team and contractors of almost every logistical service conceivable – from meals and accommodations and rental vehicles to equipment and tool rentals to general supplies from the hardware store, garage, furniture store and depaneur. Porlier even let our construction team take over the Guest House for 6 weeks, which may be the nicest ‘work camp’ they will ever stay in! It has been a pleasure working with you Mr. Porlier.

Nalcor Energy’s Menihek Hydroelectric Generating Station is located 40km south of Schefferville. Its dam and dykes are the only way to cross the Ashuanipi River for trains and fibre alike. Despite the sensitivity of the dykes to digging, Nalcor worked with the project team to identify the best route and procedure to bury the fibre across their site. Moreover, Nalcor provides space and power for backhaul equipment, and have shared their camp facilities with Sichuun as well. Thank you Nalcor for your support.

Since well before the fibre project started, McGill University’s Subarctic Research Station has been hosting a communications tower for Imuun. When Sichuun needed a place to put an aggregation cabinet for the FTTH network, McGill again offered their property. McGill’s and Oksana’s continued support of advancing communications in the region is very much appreciated.

The construction of the fibre optic network that presently serves the residents of Kawawachikamach, Matimekosh, Lac John, Schefferville, and surrounding areas was made possible through funding from the Government of Canada and the government of Québec.